Our local store owners know and support the needs of the communities they serve. Find out what our North Island teams have been up to.

Four Square has been supporting New Zealand heroes for almost 100 years. So, we thought it was time we made it official, with the Four Square Annual Community Hero Award. 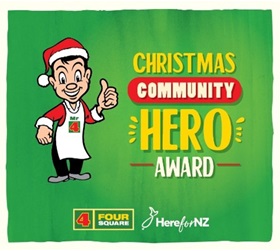 This award recognises their:

Whether that’s through a veggie garden that provides the local food bank with fresh produce, standing up a netball team so teens have an active after-school activity, or visiting our housebound and elderly neighbours. The Four Square Community Hero Award gives these heroes some aroha, because without them, our communities wouldn’t be the same.

The awards first ran in December 2020, with more than 700 nominations across the country. That's a lot of heroes! But it was a year like no other, with many extraordinary acts of kindness.

Five winners were selected in total, from Invercargill to the Bay of Plenty, each receiving a $500 Four Square gift card and a $1,500 donation to a registered charity of their choice.

Find out more about the 2020 winners

Inspired by this, and PAK’nSAVE Māngere’s ongoing support of Māngere Budgeting Services for more than seven years, Foodstuffs North Island has stepped up.

Having just moved our head office to the South Auckland community, the cooperative has committed to donating $100,000 over the next two years to Buttabean Motivation and Māngere Budgeting Services, building on the strong relationships these organisations have with PAK’nSAVE Manukau and PAK’nSAVE Māngere. In addition, over these two years the we will be donating a pallet of food product to each organisation every month.

Support where it's needed most

We created 'Here for NZ' to make a meaningful difference to Kiwis across the country.

Replacing food parcels, Kiwis in need can now choose the items they receive.

New World Pukekohe is using sound & light to improve the shopping experience for people with Autism.