Foodstuffs and the Energy Efficiency and Conservation Authority (EECA) have partnered up to build New Zealand’s 1st electric powered refrigerated truck.  From the tailgate to the engine and the fridge-freezer unit that sits on top, everything in and on the vehicle is powered by one of the cleanest fuels on the planet.

The ‘almost silent’ electric refrigerated truck, which has no tailpipe emissions, is the latest of several projects to see Foodstuffs and EECA collaborate in the drive towards a carbon neutral New Zealand by 2050.  “This really is a huge feat of Kiwi ingenuity,” says Mike Sammons, Head of Sustainability for Foodstuffs New Zealand “we couldn’t purchase a fully electric refrigerated truck, because it didn’t exist, so we had the idea to custom build one.” he added.

Foodstuffs made a successful application to the Low Emission Vehicles Contestable Fund for co-funding support. “We could immediately see the potential,” says EECA Transport Portfolio Manager Richard Briggs.  “Heavy vehicles make up less than five percent of the national fleet, but are responsible for 29 percent of land transport emissions, so decarbonising the heavy fleet as much as possible will have a huge, positive impact.”

With EECA’s backing, Foodstuffs pulled together a brains trust of some of the country’s brightest and best transport, electrical and refrigeration engineers to convert the standard Isuzu FVY, 24 tonne, 6 wheel diesel truck to be 100% electric powered.

The electric truck will operate from the Foodstuffs Distribution Centre in Grenada Wellington under the stewardship of Foodstuffs North Island Transport.  Blair Inglis, Fleet and Safety Manager was instrumental in driving the project forward “we knew from the start building a fully electric EV truck would be a challenge and we had our fair share of them along the way, including COVID-19, but we always knew if we could pull it off, this innovation could set the direction for the future of commercial transport in New Zealand and that’s very exciting” said Blair.

After extensive testing and driver training, the electric truck recently set out on its first official delivery run to New World Miramar, a 60 km round trip.  With a range of between 150 and 200 km and capable of transporting 14 pallets of product at temperatures as low as minus 15 degrees centigrade, the truck completed its inaugural journey with ease.

Bagish Bansal, Driver for Foodstuffs North Island Transport team was the driver the electric truck its first official run.  “I really liked it,” says Bagish “the ride was smooth, it was really quiet in the cab and it’s great to know that you’re helping the environment while doing your job, that feels really good.  I really hope this is the shape of things to come for my occupation.” he added.

With carbon emissions from transport currently at 18% in New Zealand, Mike Sammons is optimistic this new innovation will have a role to play in transport carbon reduction “we’re 100% committed to playing our part in creating more sustainable transport solutions, building a fully electric refrigeration truck is a massive leap towards a carbon free future for New Zealand.” Sammons concluded. 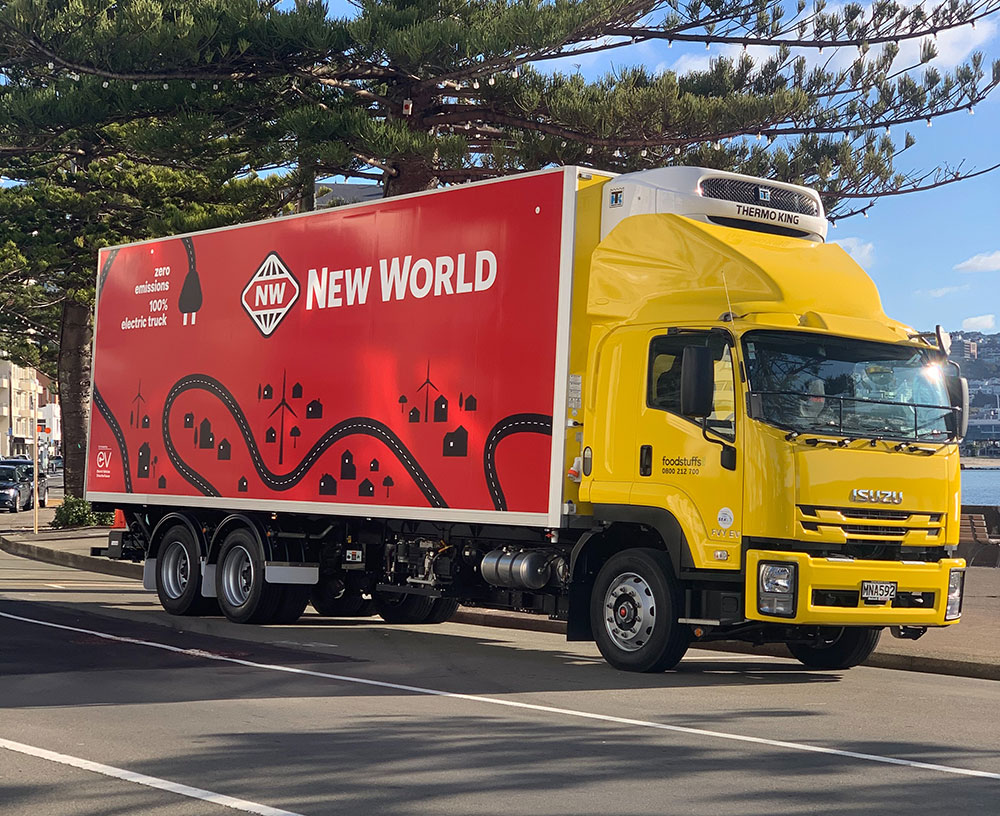