Lend a hand, give a can, and help feed a Kiwi Fam – PAK’canSAVE returns to help New Zealanders in need

After more than 40,000 cans of food were donated to local foodbanks to help Kiwis in need earlier this year, PAK’nSAVE stores are running their PAK’canSAVE initiative again, to be #HereforNZ, supporting local communities. With more families than ever struggling to put food on the table, the PAK’canSAVE initiative, which is on now, has never been more important. 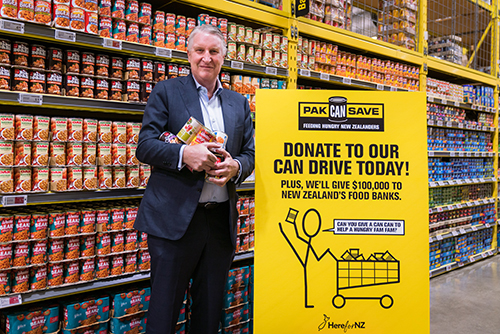 Steve Anderson, Managing Director at Foodstuffs New Zealand says “with the challenges of Delta making it harder than ever before for New Zealanders, we decided to run another PAK’canSAVE this year to help top up our partner foodbanks. We have a commitment to be Here for NZ and PAK’canSAVE is one way we can bring to life our promises of ensuring New Zealanders have access to healthy and affordable food and supporting local communities”.

PAK’canSAVE is running for two weeks from 1st until the 14th November, with each PAK’nSAVE store across the country partnering with their local City Mission, foodbank, or food rescue organisation. PAK’nSAVE is hoping to increase the number of donations for this 2nd PAK’canSAVE, with a target of ten trollies per store filled with donated cans and goods. Customers can drop donations of tinned goods to their local store which will be given directly to the foodbanks and on top of that, PAK’nSAVE will collectively donate $100,000 to these organisations.

“Covid-19 and the additional pressures lockdown has had on our community has meant there’s more demand for our food parcels. When Sonya and the team at PAK’nSAVE Napier asked if we could be a part of this campaign back in July we were delighted. It’s awesome to be part of this wonderful initiative once again,” says Tania Eden, CEO of the Ahuriri (Napier) Taiwhenua.

With Christmas less than two months away, the donations will help replenish food banks nationwide and provide food for those in need during what can be a difficult time for many financially. “It’s so important we help our whānau, there are so many vulnerable people in our community and we need to support them as best we can,” says Eden.

Check out which organisation/charity your local PAK’nSAVE is supporting below or pop into your local store to learn more.

Let’s give a can New Zealand.