With 2.1 million customer visits in our stores and online every week, around 330 stores and 24,000 Foodies across the North Island, we play a big role in Kiwis' lives. That's why it matters to us that information about our business is accurate. Your local store is owned and operated by a family who is part of your community so getting the facts straight about their stores, people and customers is something they take seriously. We're up for an honest conversation but we think it's important it's based on facts.

That's why our team have developed this fact checker to check what's said about Foodstuffs North Island and to provide the facts, based on data and evidence.

It's another small but important step towards our goal of becoming one of the most customer driven retailers in the world.

These facts will be regularly updated to provide data and analysis on the issues that matter most to our people and customers. We commonly hear comparisons to countries such as the UK, US, Canada or Australia which have lower grocery prices. New Zealand is unique, and the cost of our groceries can be different for many reasons. Some of the reasons for this include:

"Supermarkets are driving up the price of food and groceries."

It is true that the price of food and groceries, like many consumer goods, has increased in recent years, however there are several factors that influence the price that customers pay for food and groceries. We explore some of those in a little more detail below.

Inflation represents a general increase in overall prices, and there are many contributing factors including the global price of key inputs (e.g. oil and labour), policy decisions and the supply of money circulating in the economy. A small amount of inflation is typically expected and since Sept 2002, the Reserve Bank of New Zealand’s inflation target has been in the range of 1-3% annually.

In the last four years (Sept 2017 - Sept 2021), inflation has averaged at 2.3% and 2.5% according to the Consumer Price Index (CPI) and Food Price Index (FPI). Most recently however (Sept 2020 - Sept 2021), inflation was 4.9% (CPI) and 4.0% (FPI), illustrating that inflation in the past year has been much higher than the last three years. It also tells us that general inflation has risen more than food price inflation in the last year. It’s not just the price of food that is suffering, but the average price of everything.

The figure below shows the change in prices, split by CPI (red line) and FPI (black line). It also shows the groupings of the FPI, represented by the five other lines. This highlights the relatively similar levels of inflation experienced in the CPI and FPI, as well as the high variability of the price of fruit and vegetables – which is very seasonal. Our grocery price inflation is also consistent with Australia. Australia has a larger number of grocery retailers than New Zealand and Aldi, one of the smaller retailers, has nearly doubled in size between 2011 and 2021. Despite that, the price of food has increased in Australia at a very similar rate to that in New Zealand. The figure below shows both rates of food price inflation. For every dollar spent at our supermarkets, we are responsible for 19c which covers our wages and costs and provides our post-tax profit. The largest component of shelf prices is the price we pay suppliers for goods (68c in $1). 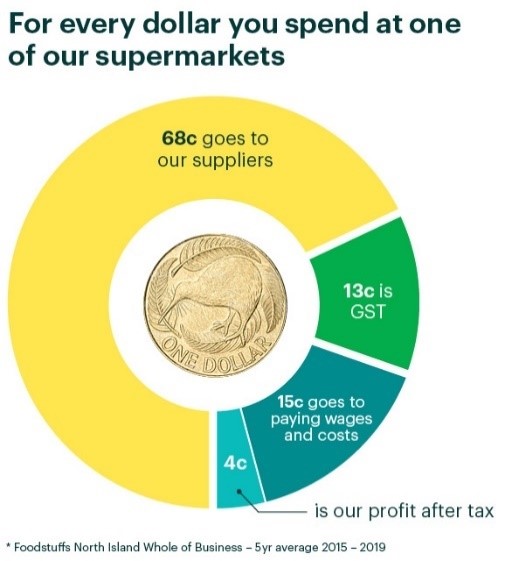 This component is currently coming under significant pressure, as our suppliers face rising operating costs under the current economic conditions. These pressures include global supply chain issues, COVID-19 and geographic factors. We looked at cost increase data and found that from January to September 2021, the average number of products with supplier price increases each month was 336 – a 20% increase compared to the monthly average for the same time period over the last 3 years. This trend has accelerated over the last 6 months (April-September), with an average monthly increase of 55% compared to the same period for the last 3 years.

“Prices are being misrepresented and manipulated.”

Pricing and the different types of promotions can be confusing, especially when retailers do things differently. We strive to provide the best possible value to our customers and have committed to simplifying our pricing and promotions.

Work is underway to reduce the different types of pricing tickets, and we are moving away from more frequent use of promotions to introducing more products at every day low pricing (EDLP).

We know from our own customer survey on our action plan (released as part of the response to the Commerce Commission's market study into the retail grocery sector) that 71% of customers say simplifying pricing and promotions is the action that will make the biggest difference to them and 67% say consistent use of unit pricing is next most important.

We also agree with the Commerce Commission’s recommendation that unit pricing should be used more widely and consistently – it helps consumers to make informed purchasing decisions. The actions outlined in our plan in relation to pricing and promotions will deliver value for customers by improving their ability to make informed shopping decisions.

The Commerce Commission calculated our Return on Average Capital Employed (ROACE or “return on capital”) – a measure commonly used to compare relative profitability of companies – to be around 24% for the retail part of our business.

The main errors were that it had incorrectly calculated the correct amount of capital funding to remove from the retail part of the business, and it had not allocated the retail land and buildings to the asset base. Although it is difficult to calculate (and in fact we have recommended to the Commerce Commission that the more appropriate way to calculate our returns is to look at the whole of business as we are a vertically integrated retailer), we have corrected these errors and shared our models with the Commerce Commission. This is shown in the bridge below. Correctly calculated, the return on capital for the retail part of our business alone is around 9-12%.

As noted, we have disagreed with the way that the Commerce Commission assessed only the returns for part of our business. Foodstuffs North Island is a vertically integrated business that includes retail, supply chain, property and IT infrastructure. Therefore, we believe that it is more appropriate to assess the returns over the whole of our business (not just part of it), the same way it has done for Woolworths and the same as the international competitors. If you calculate our returns to include the whole of business the correct calculation of FSNI’s Whole of Business returns is also between 9-12% as shown in the chart below.

We’ve compared our returns to international standards, and they’re consistent with what overseas supermarkets are earning.

"Foodstuffs is pursuing a ranging strategy to reduce the number of products and consumer choices."

Our customer driven range reviews are about ensuring we have the right products, at the right value and always available, for the 2.1m customers who purchase from us every week. These reviews are part of our customer driven business transformation journey, and it’s about making sure we are constantly modifying our range to suit changing customer preferences, based on what we know about the way customers are shopping.

Our range reviews are not driven solely by profit or margin but are guided by customer data and insights to help us understand customer needs, customer loyalty, and brand loyalty. Our goal is to make the customer experience better. We make sure that we have addressed all customer need states and shopping missions, and then look at which products don’t meet these needs, or which are highly substitutable and consistently second choice. This opens up space for the products which matter most, to ensure they are available and improve the customer experience.

Through all of this, we continue to range a very large number of products. We range 81,812 different products across all our brands (PAK’nSAVE, New World, Four Square and Gilmours). We also process a high volume of new product developments every year. For example, in 2020 we introduced a total of 9,014 new products across our stores and discontinued 3,845 – a net increase of 5,169 products.

"This reduction in products and consumer choices is to the detriment of local NZ suppliers."

As a 100% Kiwi-owned co-operative, we proudly support many local suppliers. A portion of the range in each store is left to the owner to tailor for their local community, allowing them to show off the local suppliers in their area. Our local NZ supplier base also provides a supply chain advantage, as there is generally less risk compared to importing products (especially given the supply chain issues we are seeing globally due to COVID-19).

As an example, following our recent frozen food category review there are 132 suppliers, and 93% of the suppliers manufacture in NZ or are NZ-owned businesses.

We also support NZ through our own brands: Pams and Value. Overall, about 70% of all our own brands' sales are from NZ suppliers. The next largest country of origin is Australia, making up about 8% of sales.

We are also proud supporters of FoodStarter, a competition for small FMCG and start-ups with an innovative product. We’re involved in providing winners of the competition with business and start-up support, so they can start-up or upscale to take their place on New World shelves.

"Private label only benefits retailers and provides no value to customers. It’s also unfair to suppliers."

Private label is just one choice among many on our shelves, and we are dedicated to making sure it’s a good choice for our customers. Our customer driven range reviews look at private label in the exact same way as supplier branded products. If there isn’t a clear customer need for it, you won’t find it on the shelf. 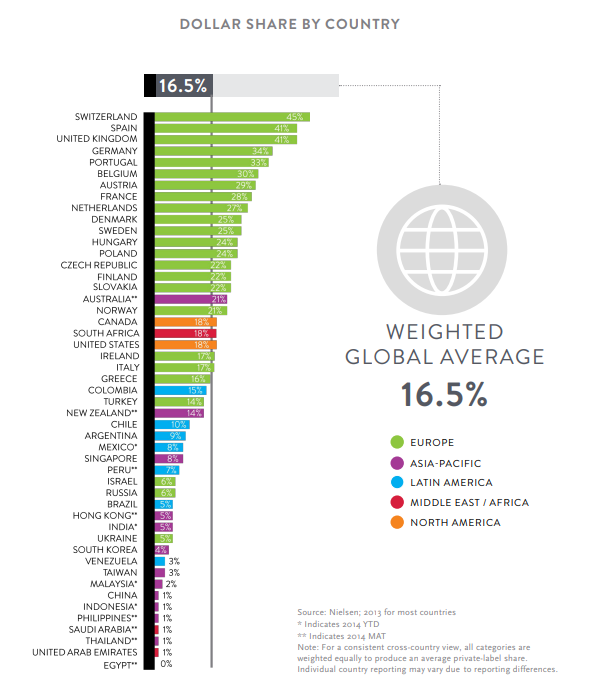 Private label allows us to make a difference in the market by holding true to our social and ethical values because we choose how products are produced, sourced, and labelled. We work to ensure our private label products are responsibly sourced, we are working on improving the sustainability of our packaging in line with our 2025 commitments, and we are supporting healthier choices through clear and transparent labelling.

For more details, check out our Social Responsibility Report 2021 on our website.

Competition in the retail grocery sector

"There have been no new grocery market entrants since 2004."

We have seen many new entrants into NZ over the past 20 years, with many being established in the past few years.

Some notable examples include:

In addition to these existing retailers, Costco is also in the process of constructing an Auckland store to open early in the first half of 2022, with a second location in Christchurch consented.

"The level of innovation in the sector is modest by international standards."

Given the smaller size of the New Zealand economy and population, it is inevitable that innovation will not progress at the same pace and scale as much larger countries – it’s simply not feasible due to cost, size, location, and demand.

Despite this, we’re really proud of the innovations we have developed. This year alone, we are investing $50 million into innovation. And for us this has been focused on improving the customer shopping experience:

"Most consumers regularly carry out a main shop from one supermarket."

Our internal data shows us that customer shopping behaviour has changed from the traditional ‘one big shop’ to ‘missions shopping’ (several small trips to different retailers to fill specific needs).

In addition, the survey data the Commerce Commission has published shows customers carry out several shops per week from a range of different stores each week: Note: This trend tends to reverse under COVID restrictions when we see a strong shift to shopping locally and shopping for one bubble. Customers spend more and buy more at individual stores and the number of transactions per customer decreases as customers shift to larger shops from a smaller number of retailers. We see this behaviour change back to normal again when restrictions ease, and ‘missions shopping’ emerges again.